The area now known as Midtown was originally home to the city’s first hospital (SSM Health St. Anthony), first grocery store, first kindergarten and more. Near the turn of the century, homes began being built in what is now the Heritage Hills and Mesta Park neighborhoods, connected to downtown by the original OKC streetcar system through the district along Walker Ave., Broadway, Classen, NE 13th and Shartel, among others, fostering growth in the area. With the dissolution of the streetcar system, the rise of the automobile and the popularity of the suburbs in postwar OKC, Midtown eventually fell into decline and by the 90s was a shell of its former grand self. However, like so many other success stories in OKC, the MAPS projects and other public and private investments helped jump-start a renaissance that began to gain steam by the early 2000s, with developers converting historic properties into new offices, housing, commercial spaces and restaurants. Now an indubitable epicenter of local shops, restaurants, breweries and more, Midtown boasts a true “live, work, play” neighborhood and a great place to support all kinds of local businesses and concepts (as well as utilize OKC Streetcar service once again)!

Chamber member Midtown Renaissance has been instrumental in the district’s revival. According to Chris Fleming, Partner at Midtown Renaissance, the public and private investment surrounding the district presaged good possibilities for the area and prompted the local community-minded development group to action.

Read the original story on VeloCityOKC.com 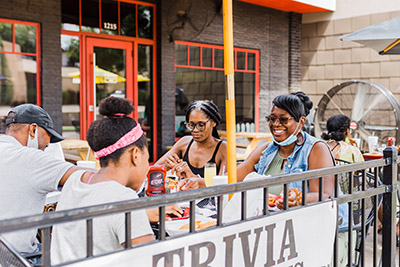