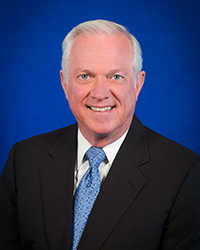 Roy became the President & Chief Executive Officer of the Greater Oklahoma City Chamber on January 1, 2004, after having served as Executive Vice President of Economic Development since mid-2002.

Roy has held numerous executive leadership positions in Chambers of Commerce and Economic Development organizations in Texas, Arizona, Ohio and Oklahoma. Some of these include the Texas Governor’s Office, the Texas Department of Commerce, the Greater Phoenix Economic Council (Arizona), the Greater Columbus Chamber of Commerce (Ohio), and the Oklahoma Department of Commerce. His experience in economic development has not just been limited to domestic activities. Roy also directed international trade and investment offices in Japan, China, Hong Kong, Singapore, Indonesia, Korea, India, Belgium, Germany and Mexico.

Roy has a Bachelor of Business Administration degree from Texas Lutheran University and pursued his M.B.A. at Sam Houston State University. As well, he is a graduate of the Institute for Organization Management at Southern Methodist University, successfully completed the American Chamber of Commerce Executive Leadership Program at the Center for Creative Leadership in North Carolina, and is a graduate of the Governor’s Center for Strategic Leadership for State Executives program at Duke University. In 2008, Roy was the recipient of the most prestigious award given by the American Chamber of Commerce Executives (ACCE) – the Chairman’s Award – for his significant contributions to ACCE and the chamber profession. In July 2012, Roy was elected and served as Chairman of the Board of the ACCE association. Also in 2012, Roy was given the Hall of Fame Award by the Oklahoma Chamber of Commerce Executives.